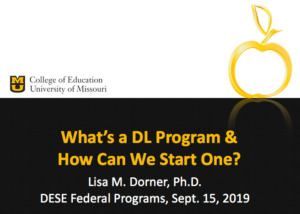 What’s a dual language (DL) program and how can you start one? This is a serious question across the United States (and world), as more and more schools are recognizing the value in preserving families’ home languages and working toward bilingualism for all students. There are many models, though a good majority of DL bilingual education programs in the U.S. mix students from two language backgrounds (for example, English and Spanish). By providing content instruction in students’ languages, DL programs develop students’ bilingualism, biliteracy, high academic achievement and cultural competencies. While it’s difficult work (see my earlier posts), we know a lot about how to create equitable programs. At a recent conference sponsored by Missouri’s Department of Elementary and Secondary Education, I devised a workshop focused on how to build a dual language program and simultaneously enhance equity for transnational students designated as English Learners. Here are my slides from that workshop – happy planning! Whats a DL Program 2019

Although TWDL programs are designed to integrate students from diverse language, culture, and race backgrounds, equity is unfortunately still a challenge. We argue that centering critical consciousness—or fostering among teachers, parents, and children an awareness of the structural oppression that surrounds us and a readiness to take action to correct it—can support increased equity and social justice in TWDL education. In our most recent publication in the journal Theory Into Practice, we elaborate four elements of critical consciousness: interrogating power, critical listening, historicizing schools, and embracing discomfort. We illustrate these elements with examples from TWDL research and practice. In addition, we describe how such consciousness impacts and radicalizes the other three core goals, in turn supporting the development of more successful, equitable, and socially just TWDL schools.

Please take a look and let us know your ideas: how might these ideas work in your bilingual school or classroom? How can this help create more equitable and welcoming educational experiences, especially for children from immigrant families?

I have been so honored to be a part of the Fulbright Specialist program this past February and March 2018 in Barranquilla, Colombia at the Universidad del Norte. I’ve worked for the past few weeks with colleagues at the Instituto de Idiomas on a new undergraduate program: Lenguas Modernas y Culturas. This program has a special focus on not only teaching multiple languages (students will be proficient in two and know a third upon graduation), but also integrating ideas of critical citizenship, discourse studies, and global perspectives into their coursework.

On March 16, I presented some thoughts on this ambitious goal, based upon my own (and colleagues’) work on dual language/two-way immersion programs and transnational/lingual youth in the US (Heiman, 2017; Kim, 2018; Layton, 2017). This work is also inspired by colleagues in citizenship education, such as Nicole Mirra and Thea Abu El-Haj.

I welcome your ideas and feedback on this Foro Fulbright!

“Our future is not in the stars but in our own minds and hearts. Creative leadership and liberal education, which in fact go together, are the first requirements for a hopeful future for humankind. Fostering these–leadership, learning, and empathy between cultures–was and remains the purpose of the international scholarship program that I was privileged to sponsor in the U.S. Senate over forty years ago. It is a modest program with an immodest aim–the achievement in international affairs of a regime more civilized, rational and humane than the empty system of power of the past. I believed in that possibility when I began. I still do.”

[J. William Fulbright, From The Price of Empire]

This morning, I was listening to NPR, and I heard a story about how one young man decided to get out of his same old bubble. He built an app that used publicly-listed Facebook events to randomly choose new places for him to go — to get him out of that bubble. Attending random events, he made new friends and had various opportunities to view the world from new perspectives.

So how might we help develop similar bubble-popping experiences for young people? I believe that schools like the St. Louis Language Immersion School (SLLIS) can and do help children view the world in new ways. SLLIS has integration as one of its core values: integration across race, income level, language background, immigrant status, and more. The school immerses children in new perspectives, quite literally, by teaching students all of the typical subject areas using a language other than English. For most students at the school, English is their first and only language, but the school also attracts many children from multilingual households.

How else might schools pop bubbles? We cannot just put people together in the same room to explore new perspectives; we have to talk, think, and write about such experiences. In the spring of 2017, the Quality Teachers for English Learners project led by Dr. Kim Song supported a series of family literacy events at SLLIS. I participated in these events as both a leader and a participant with my daughter. Our goal was to work with families to support them sharing their stories, as one more way to “pop some bubbles” and learn from others. I’m thrilled to share the pre-press version of my daughter’s book, in which she documents how her school has opened her eyes to an Outside World.

As highlighted in the Cambio Center’s November 2015 e-brief, dual language (DL) education programs are growing exponentially in the United States. By some accounts, DL programs – especially two-way immersion models that integrate students from two different language backgrounds – are the “astounding” answer to desegregating our schools, preparing children for a transnational world, and developing smarter thinkers. However, scholars like Nelson Flores remind us that the politics of language education and histories of racism in U.S. schools make it very difficult to realize the “rich promise” of DL education for all students, especially those from minoritized* groups. In this longer blog post, I want to briefly review research that documents the outstanding opportunities of dual language programs to enhance students’ academic and linguistic capacities, as well as introduce some of their persistent challenges.

*I sometimes use the word “minoritized” in my writing. I do this when referring to groups that have been called “minority” in comparison to dominant cultural groups, such as students who speak a minority language (i.e., language other than English in the US) or come from a minority background (e.g., someone who identifies as Black/African American in the US). Using this term, however, suggests that the referenced group of people is somehow smaller, less than, or subordinate, but this is not correct and it is not how individuals who live with these categories see themselves. By using the word “minoritized” instead, I aim to highlight that others have placed this suggestion upon particular groups, who are by no means “minor.”

A growing body of research has concluded that DL programs result in strong academic and linguistic outcomes for all students. Many come to this conclusion by comparing the academic assessment results of students in different kinds of language programs to each other. Over many studies, Kathryn Lindholm-Leary has found that TWI programs, in comparison to other educational models, result in better academic outcomes for native Spanish speakers who are classified as English Learners (ELs). For example, Spanish-speaking students in California TWI programs outperformed “EL” peers in traditional, transitional bilingual education programs on English tests by Grade 6 (2001). In addition, English-speaking students in TWI outperformed their peers in English-only, general education programs by about 10 points on California assessments of reading and math. Moreover, TWI students in this study revealed positive attitudes towards their programs, teachers, classroom environment, and the learning process.

However, too few of these studies examined students over long periods of time, and they did not control for “selection effects.” Specifically, most research has not examined whether students who already have higher academic abilities or whose families have greater resources are the ones that choose DL programs. In turn, it may be that such prior experiences are shaping their academic and linguistic success, not the DL programs themselves. Most recently, researchers in Oregon have examined a “randomized experiment” across different DL programs in Portland Public Schools (including Japanese, Mandarin, Spanish and Russian languages). In this district, some students were put randomly by lottery into one-way and two-way immersion models, while others who did not “win” the lottery were placed in general education programs in only English. Comparing students in this sort of research design helps to take care of the “selection effects” named above. Among other positive results, they found that DL students’ reading achievement was higher than their peers in English-only education programs by fifth and eighth grade. This is one of the most convincing and well-designed studies studying academic and linguistic outcomes to date in DL.

Nonetheless, besides needing additional research to provide stronger evidence of effectiveness, another large body of research demonstrates that there are persistent and serious challenges in DL education, especially when we question whether such programs are equitably serving children across racial, linguistic, and cultural groups. I know from prior work that well-implemented two-way immersion programs are difficult to implement given the politics surrounding language education and identity in the US. Recently, Claudia Cervantes-Soon, Deb Palmer, and I worked with colleagues to review research on the experiences of minoritized children in two-way immersion programs. (Our results will be published in the Review of Research in Education in 2017). We found that there are persistent inequities in many areas of TWI. Here are just a few examples:

In summary, future research needs to continuing examining DL education and how it could become an “astounding” success for all, across all contexts. With continued support from the Cambio Center, I am working with the Missouri Dual Language Network to examine these very areas across our state: (1) Empirically, we need longitudinal research on DL student achievement that examines how different program components lead to enhanced academic and linguistic outcomes for diverse sets of students over time. (2) Theoretically, we need to better understand the links between bilingualism and children’s and their families’ experiences, including DL programs. (3) Politically, we need to question whether DL programs are meeting their goals for all youth, and understand how DL programs are implemented in a variety of diverse contexts, like those found in Missouri. In my next blog posts and e-briefs, I will present more about the challenges that face us, as well as concrete ideas for moving us forward.